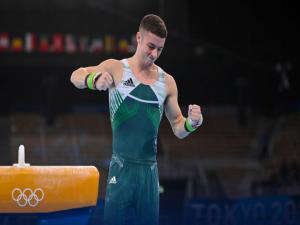 Newtownards gymnast Rhys McClenaghan has finished seventh in the pommel horse final at the Olympics.

The 22-year-old had an early fall, but bravely completed a brilliant routine.

Ireland’s first Olympic gymnastics finalist @McClenaghanRhys from Newtownards misses out on a medal in the pommel horse in Tokyo. The 22-year-old slipped off early on, but bravely completed a brilliant routine. He'll be back#GymnasticsIreland #TeamIreland #Tokyo2020 pic.twitter.com/X3I43lfzYx

There was also disappointment for Rory McIlroy in Tokyo on Sunday morning.

The Holywood golfer made it to a seven-way, sudden death play-off for a bronze medal - but was eliminated on the third extra hole.

Rory McIlroy has missed out on a medal at the Olympics

The County Down golfer was involved in a seven-man play-off for bronze, but has just been eliminated @McIlroyRory #TeamIreland #Tokyo2020 pic.twitter.com/vcQMPBPaEQ

Earlier, Belfast boxer Aidan Walsh withdrew ahead of his semi-final due to an ankle injury - reportedly sustained in the ring while celebrating his quarter-final victory earlier in the week.