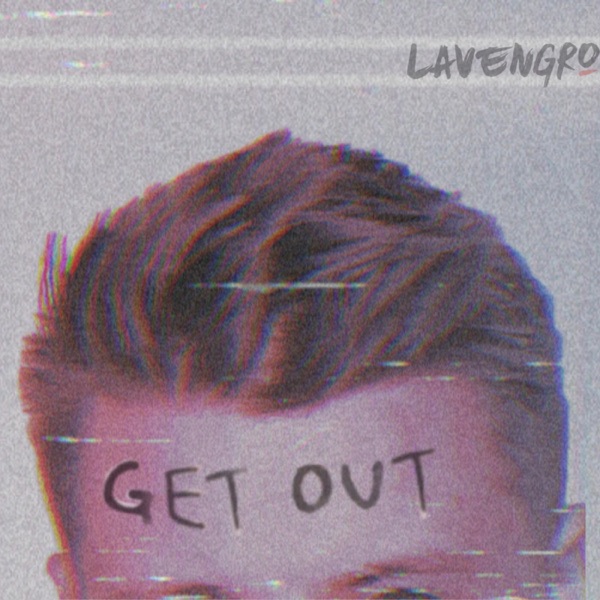 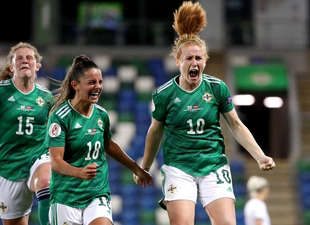 Rachel Furness gets her goal

The Northern Ireland women’s team marked their return to Windsor Park with an impressive victory over Latvia.

They had not played at the stadium for nine years – but they looked at home when registering a 4-0 win for the second game running.

Goals from Louise McDaniel, Kirsty McGuinness, Marissa Callaghan and Rachel Furness (penalty) were enough to secure the victory against Latvia in a FIFA Women’s World Cup 2023 qualifier played in front of more than 4000 fans in Belfast.

Northern Ireland created several chances during the 90-plus minutes, just as they did in the 4-0 win over Luxembourg in their opening European Qualifying Group D fixture on Friday, and they could have scored more than four.

Kirsty McGuinness, who was given the captain’s armband for the night as she won her 50th cap for Northern Ireland, was immediately on the front foot, running at the Latvian defence.

In the early stages Sarah McFadden headed over the top, while Lauren Wade’s shot from distance flew above the bar, too.

Latvia attacker Olga Sevcova, who was looking dangerous down the left, broke clear on 17 minutes and Northern Ireland keeper Jackie Burns produced a fine stop from her low drive.

Wade, who was producing some great runs down the right, fired in a series of crosses which were blocked by the visitors’ defence.

A lofted McGuinness delivery from a free-kick was fumbled by the Latvia keeper but her defence cleared the danger.

McDaniel scooped a shot over the top before Wade fired another shot above the bar.

On 35 minutes McFadden met a McGuinness cross and her looping header hit the top of the bar.

The Latvians, who had not managed either a win or a draw in their previous eight games across 2020 and 2021, were put under constant pressure as half-time approached.

Chloe McCarron, who was making things tick, fired a shot over and Furness let fly from distance, however her effort drifted well wide of the target.

On the stroke of half-time Furness played a superb crossfield ball in behind the Latvian defence to the onrushing Wade, however she screwed her shot wide of the far post.

Northern Ireland 0-0 Latvia #GAWA girls looking good again as they go for 8th competitive victory on the bounce, but the visitors have had their moments. Interesting! @NorthernIreland pic.twitter.com/4DADD3Wj9H

The temporary skipper fed regular captain Callaghan just after the restart but her shot slid wide of the upright.

Minutes later Northern Ireland took the lead. Callaghan had a shot blocked but the rebound fell to McDaniel and she drilled the ball into the top corner. It was her first goal at senior international level.

McGuinness, sent clear by Furness, fired a shot straight at the keeper, while Wade headed another Furness delivery on to the top of the net.

Then Wade’s low shot was pushed around the post by Latvia keeper Enija-Anna Vaivode before Callaghan’s speculative effort sailed over the bar.

On 65 minutes McGuinness grabbed Northern Ireland’s second with a lovely finish. She was played in by Callaghan and drew the keeper before firing a shot low into the far corner. It was a great way to mark her 50-cap milestone.

A neat cross from substitute Rebecca McKenna was headed over by Furness, who shot straight at the keeper minutes later.

Substitute Caragh Milligan set off on a couple of lung-busting runs but her tantalising crosses into the area were cleared.

Northern Ireland made it three on 78 minutes when Vance’s superb cross from the left was chested home by Callaghan from close range.

The girls in green and white made it 4-0 four minutes later from the spot. The penalty, awarded when Latvia midfielder Karline Miksone handled a Callaghan drive, was hammered into the net by Furness.

What a picture from CSX Sports/Chris Scott. Says it all. The pride. The passion. @Furney1988 & @NorthernIreland on fire in World Cup qualifiers.

What a night for a rising star of the NI men's team.

Tyrone teenager Conor Bradley has become the first Northern Ireland player since Sammy Smyth in 1954 to feature in a competitive match for Liverpool.

The 18-year-old defender impressed as the Reds beat Norwich City 3-0 in the Carabao Cup.

Kop boss Jurgen Klopp said he had "a super game."

NI defender Conor Bradley starts for @LFC in tonight's @Carabao_Cup clash v @NorwichCityFC. The last NI player in a competitive game for the Reds was Sammy Smyth - back in 1954! #GAWA #LFC #ConorBradley pic.twitter.com/cVGAHrAXcA

There were first round matches in the Co. Antrim Shield.

Holders Larne made it through with a 2-1 win over 10-man Glentoran in a repeat of last season's final.

New Dundela boss Niall Currie had a win against his old club Carrick and the Reds hit nine...