Deal done - Linfield and Larne: Nasseri off to Inver while Donnelly heads to Healy 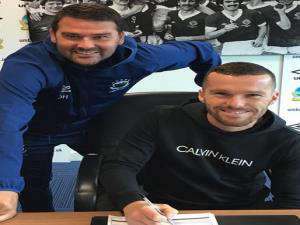 Linfield and Larne have sealed a swap deal for two forwards.

It sees Marty Donnelly going to Windsor Park with Navid Nasseri heading in the opposite direction.

Donnelly has been handed a two-year contract.

He'll turn 33 on the opening Saturday of the season when the Blues host his old team, Crusaders.

He has been one of the stars of the renaissance at Inver Park since joining the club from Cliftonville in January, 2018.

Two forwards on the move - in opposite directions.

25-year-old Nasseri switched to Linfield from Glentoran last year but leaves after a single season when he scored three goals in 39 appearances.

Earlier, the man who famously once signed for Linfield and Crusaders on the same day, then opted for the Blues has finally started his second stint at Seaview:

There was also some late sporting drama on Monday night:

The clash in Leicester was billed as the battle of the exes:#britishopensnooker pic.twitter.com/GKmEpk5s5A