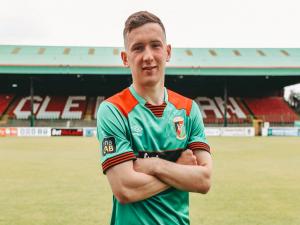 Bobby Burns after recently signing on loan for Glens.

He took to Twitter last night to say his tibia and fibula were fractured and he'll be out for the rest of the season.

The Northern Ireland under-21 international is on loan at the Oval from League Two Barrow.

In his post, Bobby confirms he apportions no blame to Bannsiders striker James McLaughlin:

Sadly confirms he's out for rest of the season with double leg break but apportions no blame to @ColeraineFC striker James McLaughlin for Saturday's incident at the Showgrounds:

Sport on air on the hour pic.twitter.com/wAPF0xepUe

The senior tour success is his first victory since winning the Open at Royal St George's in 2011.

Look who's back in business!

It's his first victory since @TheOpen 2011

Sport on air from 7am pic.twitter.com/Fdz76IGfgn

Donegal will meet Armagh in the Ulster football semi-final on Saturday week.

The Orchard County beat Derry in the last eight yesterday, while Donegal knocked out Tyrone.

Great battle at Celtic Park but Orchard County through to play @officialdonegal in the semi-final on Saturday November 14th@UlsterGAA #Ulster2020 pic.twitter.com/3y9HNi4dNe