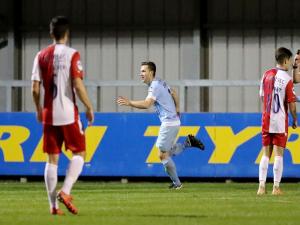 Warrenpoint Town have beaten Linfield for the first time in the club's history.

Barry Gray's men hit back from a goal down to win 2-1 at Milltown last night.

The 'Point manager said: "It's a massive three points for us first and foremost, and a huge result.

"I was probably a bit disappointed to go behind, but our hard work and management of the game in the second half was what won it for us.

"Our willingness to keep working and break up their play as much as we did was impressive, and it is great to finally get a win against Linfield after trying for so long."

Blues boss David Healy said it was a shocking performance from the defending champions:

Famous win for Barry Gray’s men who come from behind to beat the Blues for the 1st time ever! Miserable 600th appearance for Jamie Mulgrew. Linfield 2nd in standings @larnefc top table tonight pic.twitter.com/9i12M7tG2l

Larne top the Danske Bank Premiership after a 2-0 win at Coleraine. David McDaid bagged both goals for Tiernan Lynch's team.

Coleraine 0-2 Larne@larnefc top ahead of Linfield’s 5.30 game at Warrenpoint

Here's how they stand after all that:

What a day in @DanskeBank_UK Premiership ...

Larne are due to meet the Glens in the Shield final on Wednesday, if it happens:

🎥 @Glentoran consider withdrawing from Co. Antrim Shield final with @larnefc. It's to be staged on Seaview's plastic pitch on Wednesday ahead of Crues v Glens on Sat.

Co. Antrim FA says it "will not be providing a response to the comments of a manager" pic.twitter.com/G2jQzZ2U6u

Armagh Ladies have missed out on a place in the All-Ireland football final.

They lost by five points against defending champions Dublin in Cavan.

Orchard County’s championship journey ends after giving it a real go v the mighty Dubs who continue their quest for four in a row. But well done to the Ulster girls at Breffni Park. 👏 👏 #Armagh #Dublin pic.twitter.com/TETkWUyMAb

And in snooker Mark Allen has been knocked out of the UK Championship.