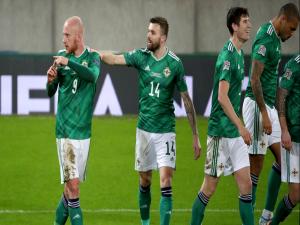 Relegation from Group B1 was already confirmed for Ian Baraclough's side earlier in the day after a UEFA panel awarded Romania a 3-0 win for their cancelled game against Norway.

However, they were on course for a much-needed victory when Liam Boyce bundled home from close range in the 56th minute.

It was not to be though as the hosts failed to keep a clean sheet, Eric Bicfalvi grabbing Romania's equaliser with nine minutes left to play.

The draw means Northern Ireland, who will be playing in League C in the next edition of the tournament, are still waiting for their first victory in the Nations League, while Romania finish third in the group.

Liam Boyce put NI in front in 2nd half, but another late goal conceded sees Romania snatch a point at Windsor.

The Republic of Ireland avoided relegation to League C but their worrying goal drought continues after 0-0 draw against Bulgaria in the Nations League.

Stephen Kenny's side knew a point would see them stay in League B for another campaign at the expense of their opponents and they did just that, although it was a rather uninspiring match in Dublin between two teams bereft of confidence.

Both sides lacked a real cutting edge - Bulgaria had the only shot on target in the game - with some poor passing throughout, but the Republic of Ireland did have the best chance of the game when Robbie Brady rattled the crossbar with a superb curling effort in the second half.

The Republic of Ireland have now gone over 11 hours without a goal and will end a dismal 2020 without an international victory, the first time they have been winless in a calendar year since 1971.

While the draw was enough to avoid relegation, it is not likely to be enough to see them keep their place in pot 2 for the World Cup qualifying draw on December 7. These are decided on FIFA rankings, which is expected to go down from their current 20th spot at the end of the month and put them into the trickier pot 3.

Republic remain in UEFA Nations League B, after a scoreless draw in Dublin

Sion Swifts and Linfield both kept their slim hopes of winning this season’s Danske Bank Women’s Premiership alive as they cancelled each other out in Wednesday night’s encounter in Strabane.

Erin Fildara twice gave Tony McGinley’s side the lead but Linfield - who had won away to both Cliftonville and Crusaders in the past week - hit back each time through Rebecca McKenna and Alison Smyth respectively.

Perhaps the real winners of the night were league leaders Glentoran - who did not play - who are now five points clear of the Blues with two games to go, with Sion Swifts a further two points back but still possessing a game in hand.

The title is far from secure for the Glens yet as they have to play Sion - who defeated them earlier in the campaign - and travel to in-form Crusaders, while the Blues and Sion are still to face each other in South Belfast.

Crusaders Strikers ran out emphatic seven-goal victors at Cliftonville in the North Belfast derby on a night when striker Emily Wilson netted a remarkable four goals.

Claire Rooney’s own goal opened the scoring for the Strikers before Amy McGivern’s towering header from a corner doubled the score before the break.

Emily Wilson netted twice in the second half for Spike Hill’s Crusaders with the home side’s Fionnula Morgan sent-off in between those strikes, due to an off-the-ball incident - the third successive home game when Cliftonville have finished with 10 players.

The Crues then extended their lead to five as experienced defender and captain Julie Nelson scored directly from a free-kick to wrap up the points.

Wilson then netted twice more in the closing stages to complete her quartet of goals and wrap up an impressive derby triumph.

The result lifted Crusaders into third spot above Sion by two points, although the Strabane-based side have two games in hand.

Well, have a look at this: @SionSwiftsLFC and @LinfieldLadies share spoils in Strabane as @CruesStrikers go seven-up at Solitude and move above them both into second spot!@GlentoranWomen five points clear#DanskeWomensPrem pic.twitter.com/3V29Srr8tH