You're All I Have

Probe over cup clash at Warrenpoint, Glens through after Robbie treble in 100th game 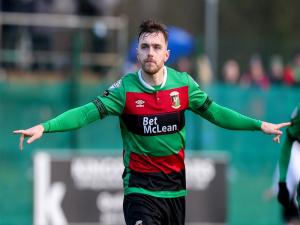 The Irish FA is to launch an investigation following incidents at the end of Saturday's Irish Cup tie between Warrenpoint Town and Ballymena United.

Players and supporters were involved in scuffles and Warrenpoint goalkeeper Mark Byrne was sent off after the visitors scored the winning goal.

The Sky Blues will travel to Ballinamallard in the quarter-finals at the end of this month.

The other last eight ties are Larne against Coleraine, Dungannon at home to Cliftonville and Glentoran against Crusaders at the Oval.

Mick McDermott's men beat Queen's 3-2 at the Dub with Robbie McDaid hitting a hat-trick on his 100th appearance for the Glens.

VIDEO interview: @Glentoran hero @RobbieMcDaid on marking his 100th appearance with a cup hat-trick and tribute to @curtis_allen after his strike partner's dramatic 11th hour deadline day move to @ColeraineFC

Ties to be played last weekend in Feb. #SadlersPeakyBlinderIrishCup

Don’t worry @RobbieMcDaid hasn’t gained a few pounds! The bulge under the famous green, red & black jersey is the match ball he takes home after his brilliant #IrishCup hat-trick v @qubafc on his 100th appearance for @Glentoran Robbie is on air on the hour + Cup draw coming up pic.twitter.com/dBrszmBm7Y

🎥 @qubafc manager Peter Thompson “so proud” of his players after their heroics v @Glentoran in #IrishCup - says memories from today and victory v @OfficialBlues in last round “will live forever” pic.twitter.com/IAtOOPyuwv

GlensTV extended match coverage from our 3-2 victory against @qubafc. A top hattrick by Robbie McDaid.