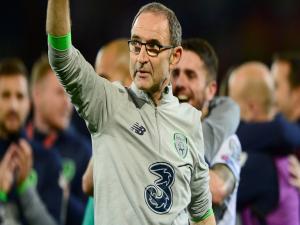 Martin O'Neill hailed his "magnificent" Republic of Ireland players after their 1-0 win against Wales earned them a play-off spot.

James McClean scored the only goal of the game in the 57th minute as O'Neill's men became the first side to win on Welsh soil in four years, bagging themselves a World Cup play-off place in the process.

O'Neill's side find out their opponents next Tuesday and he could not hide his pride at the full-time whistle.

"I'm so proud," he told Sky Sports. "The players were magnificent playing away from home at a very good Welsh side. To win on their territory was a great result for us.

"That last half hour seemed an eternity. We had to withstand pressure but we knew at some stage we would have to try to win the game and we did it. The goal was worthy of winning any game.

"We are in the play-offs. Whenever the draw is made we will take our chance.

"The impression of our campaign? Absolutely delighted. When the draw was made I thought we had a very difficult group. We have come through, fantastic."