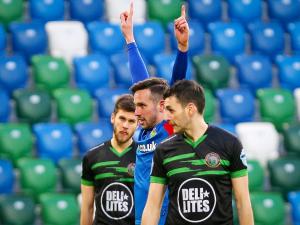 Linfield have moved four points clear at the top of the Danske Bank Premiership after thrashing Warrenpoint 6-0 on Saturday.

All the goals came in the second half at Windsor Park with Andy Waterworth scoring four times.

The Blues say on loan forward Joel Cooper was a late withdrawal from the team due to a registration issue with the Irish FA.

Glenavon have announced goalkeeper Jonny Tuffey is leaving the club after turning down a new deal.

Former Shamrock Rovers keeper Craig Hyland has been brought in as a replacement.

Three games were wiped out  by the weather at the weekend, and two more on Tuesday night.