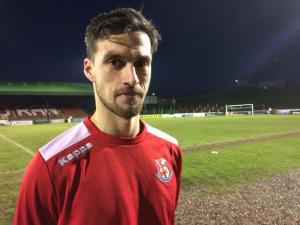 Crusaders remain seven points clear at the top of the Premiership after a 3-0 win against 10-man Glentoran at the Oval yesterday.

Striker Nacho Novo was sent off before half-time, following allegations of a head-butt.

Glens manager Gary Haveron says he wasn't happy with the referee's decision and is considering an appeal.

"I think we have to look at it, the evidence is there, how (referee) Evan Boyce misses the initial clash between the two players is beyond me and if he deals with that the way he should, then the second clash never happens."

Linfield stayed in touch with the Crues by beating Glenavon 2-1 at Mourneview Park.

Third-placed Cliftonville were also 2-1 winners, at home to Ards.

And, Coleraine had a 4-2 victory against visiting Portadown.

Bannsiders striker Eoin Bradley was stretchered off with broken ribs and a punctured lung.

In Friday night's match, two goals from Josh McIlwaine gave Ballinamallard a 2-1 win in the basement battle at Carrick.

It moved the Mallards eight points ahead of the second from bottom east Antrim team.