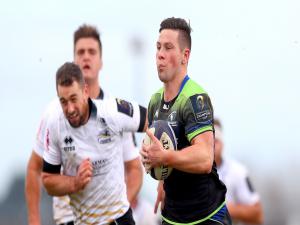 He'll arrive on a two-year deal

He'll be moving from inter-provincial rivals Connacht, and will join from the summer, replacing the departing Ruan Pienaar.

The 26-year-old started his career with Leinster, and made his debut against Ospreys in September 2011.

He then made his European bow later that season when Leinster beat Ulster in the 2012 Heineken Cup Final.

Cooney made 27 appearances for the RDS club before moving to Connacht for the 2014-15 season, where he has amassed 30 caps.

Confirmation of another new signing - scrumhalf John Cooney will join us from Connacht this summer #WelcomeJohn pic.twitter.com/rHz7PL4taa

Commenting on his decision to move north, Cooney said:

"I'm delighted to be joining Ulster. My mum lived in Belfast for a few years and she really enjoyed the city so that made my decision a lot easier.

"Les Kiss was a big factor is my move too as he's so well-respected and I believe I can develop my game under his coaching. I spoke with him at length a few times about his hopes for Ulster Rugby and it sounds like an exciting time to be involved in the set-up.

"I loved my time in Galway and it re-energised my career, but I felt it was the right time for a fresh challenge. I have aspirations to play international rugby but first and foremost my focus will be on earning the starting scrumhalf position at Ulster.”

"Having searched domestically and abroad for the best available Irish-qualified scrumhalf, John was undoubtedly our number 1 target and we're delighted that he'll come on board from this summer. Bryn (Cunningham) has been on the ball throughout this process and has been working quietly in the background to ensure the deal was completed successfully.

"John has had a couple of unfortunate niggles which have restricted his game-time, but what really impressed me is his attitude and competitive approach in coming here to Ulster and wanting to earn a starting jersey on a weekly basis. He is a driven person who wants to develop his game and he certainly has the attributes to do so. I know from speaking with the Irish management team that they also rate him very highly and he has the potential to play international rugby.

"He is a great talent; threatening in attack, strong in defence, has a good kicking game and excellent game management skills. I think he will really suit the style of play that we will play next season, with a strong mobile pack and an exciting backline.

"Our pack will be strengthened by a couple of additions next season and they should help to provide the platform for our scrumhalves and outside backs to thrive.”