Panic At The Disco 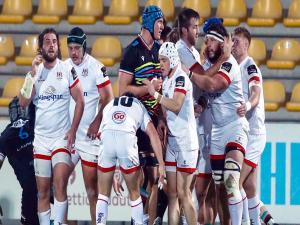 On his 50th cap for the province, Marcell Coetzee became the first player to score four tries in a PRO14 game for Ulster as they thumped Zebre 57-14 in Parma.

Ulster have made their best start to a campaign since 2012 with the win, which takes them 19 points clear of third-placed Ospreys in Conference A of the Pro14.

The Ulstermen do an Italian job & notch up their 6th win on the bounce. Quite a night for the magnificent @marcell_coetzee - he helps himself to FOUR tries on his 50th Ulster appearance! #ZEBvULS pic.twitter.com/QnAGEGNzLQ

Fans are back at the Kingspan this weekend. Ulster Rugby: pic.twitter.com/u5gD2yhVXi

In football, Portadown's game against Glentoran on Friday has been called off due to Covid-19 issues:

Portadown v Glentoran scheduled for this Friday night is off. NIFL says it’s “in line with the NI Football League's Covid Case Policy.”

But it's game on for the first Big Two derby of the season with Linfield facing the Glens at Windsor Park next Tuesday.

It's a date - the first Linfield v Glentoran Big Two derby of the #DanskeBankPrem season has been rearranged for next Tuesday, Nov. 24th, Windsor Park, 7.45pm. Should be interesting! pic.twitter.com/9xEowQKDaA

And there's an update on tickets for the County Antrim Shield final: