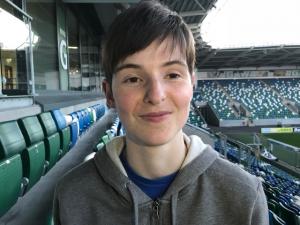 Linfield continued their perfect start in the Danske Bank Women’s Premiership with a 3-0 victory at Derry City on Wednesday night.

Abbie Magee, Rebecca Bassett and captain Kirsty McGuinness were all on target for the Blues, who have won all six league games to date without conceding a goal.

First half goals from Rachel Rogan and Nadene Caldwell put the East Belfast side in control but Rachel McConnell grabbed one back for the Reds after the break.

However, a double from Kerry Beattie ensured the League Cup finalists remain within five points of leaders Linfield.

VIDEOS | Goals, goals and more goals in the @DanskeBank_UK Women's Premiership - catch up with the highlights from last night's games as @LinfieldLadies, @GlentoranWomen and @CruesStrikers all picked up wins on their travels. #DanskeWomensPremhttps://t.co/E9S0XejnHl

Crusaders Strikers ended a run of four straight league defeats with a five-goal victory at Londonderry Park against Comber Rec.

Caitlyn Hamilton, Danielle McDowell and Courtney Moore were all on target for Spike Hill’s side, with Amanda Morton netting a double.

The Crues remain fifth in the standings, three points behind Cliftonville, while Comber Rec and Derry City both stay on one point each.

Glens move back above @SionSwiftsLFC into 2nd, on goal difference +5 better pic.twitter.com/J5tpg1ZPyu