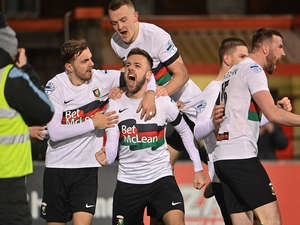 It's been a winning weekend for the top three teams in the Danske Bank Premiership.

There were also Saturday afternoon wins for Ballymena, Coleraine and Dungannon Swifts.

.@OfficialBlues edge clear at the top again ahead of Tuesday's trip to Solitude @cliftonvillefc - one of six mid-week matches also including @Glentoran v @ColeraineFC at the BetMcLean Oval. #DanskeBankPrem pic.twitter.com/nCEjfAImes

The two big matches were on Friday night.

Glentoran had moved level on points with Linfield at the top after a 2-1 win against Crusaders.

Conor McMenamin and Robbie McDaid scored for the title-chasers at Seaview.

Crues midfielder Jude Winchester and manager Stephen Baxter were both sent off in the second half.

Glens players dedicated the victory to their teammates Rory and Jay Donnelly whose mother passed away this week.

Fans also paid tribute with applause during the game from 9-10 minutes - the shirt numbers worn by the Donnelly brothers.

In the other game on Friday night, a Ryan Curran goal gave Cliftonville a 1-0 victory away to Larne.

Two second half goals saw Glentoran come from behind to defeat Crusaders at Seaview and move level on points at the top of the table.

A bright start to proceedings resulted in the Crues going in front after 12 minutes when Ben Kennedy sent over a corner from the left for Josh Robinson to escape his marker and nod past Aaron McCarey.

And Stephen Baxter's side will feel they should have had the opportunity to double their advantage a couple of minutes later when Kennedy went down inside the area under a Paddy McClean challenge but despite vociferous protests their penalty appeals were waved away.

The home side threatened again not long after that. Again Kennedy was involved when his free-kick was met by Daniel Larmour but his header was superbly tipped over by McCarey.

However, Glentoran levelled just three minutes into the second half. A long ball was sent into the box for Conor McMenamin who flicked it past two defenders and sent a composed left-foot half-volley past Jonny Tuffey into the opposite corner of the net.

Crusaders were reduced to ten men six minutes later after Jude Winchester was shown a straight red card for a challenge on Joe Crowe.

Buoyed by this, the visitors then made their numerical advantage count on 65 minutes. McMenamin turned provider on this occasion to deliver a cross from the left which Robbie McDaid expertly headed home beyond Tuffey.

The Crues almost levelled in the closing stages but Paul Heatley's sweetly struck volley was matched by a determined stop from McCarey.

With the points almost in the bag the Glens nearly added a third as the game slipped into stoppage time when Sean Murray's effort looked to be heading in only for Jordan Forsythe to dart back to make a goalline clearance.

Larne might have opened the scoring with around ten minutes on the clock when Tomas Cosgrove sent over a cross from the right for Ronan Hale but he could only direct his header straight at keeper Luke McNicholas.

But the deadlock was broken in favour of the visitors on 13 minutes after a Jonny Addis punt out of defence reached Ryan Curran who beat Rohan Ferguson to the ball to head home from inside the area.

Larne pressed for the equaliser, and might have grabbed it later in the half through John Herron who saw his first effort charged down and his follow up go just wide of an upright.

At the other end Cliftonville came close to doubling their advantage when Conor McDermott's drilled effort from distance was pushed away by Ferguson before another Curran effort was deflected just over the top.

Ben Doherty and Lee Bonis combined for Larne early in the second half for the former to see his long range attempt go over while, for Cliftonville, Kris Lowe's back post chance from Levi Ives' corner was blocked on the line from Cian Bolger.

As the game progressed Larne continued to seek out the leveller, and might have found it just after the hour when Bonis rose to meet a Cosgrove delivery but could only head over at the back post while Doherty had an effort from a good position blocked by Luke Turner.

Both sides had their chances late on. David McDaid did well to turn inside the box to test McNicholas with a rifled effort with Paul O'Neill fizzing an effort on target only to be saved by Larne substitute keeper Conor Devlin.

Tiernan Lynch's side had one last chance in the closing moments when Mark Randall offered up a curling effort outside the area only for the ball to whistle just past the post.

Reds bounce back from Monday night defeat at home to the Glens. First half header from Ryan Curran clinches three precious points at Inver Park. #DanskeBankPrem 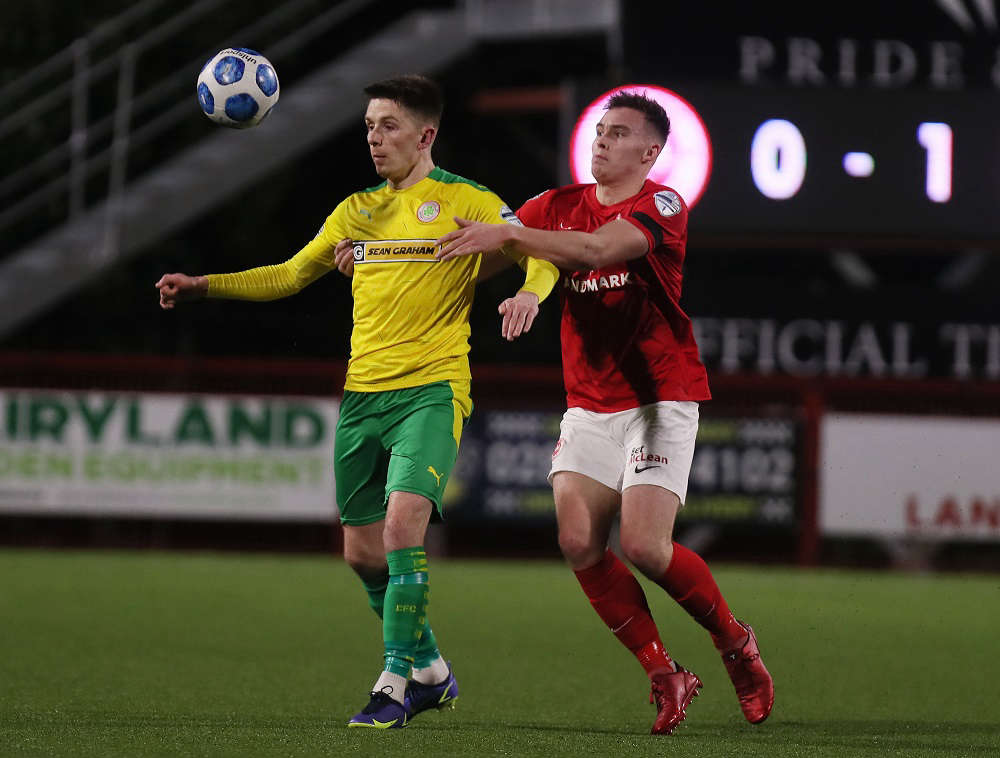