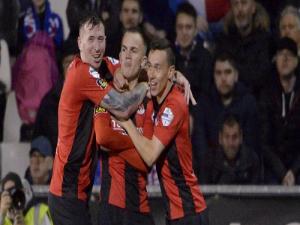 Crusaders are six points clear at the top of the Danske Bank Premiership after beating Linfield 1-0 on Friday night.

Rory Hale hit the winner at Seaview early in the second half, finding the top corner from outside the area.

Blues boss David Healy said it was a frustrating and disappointing night for the defending champions ...

It was another meltdown for Gary Hamilton's beleaguered Lurgan Blues who had been beaten 7-0 by Linfield last week.

A Joe Gormley goal gave Ciftonville a 1-0 win at Glentoran to send the Reds second.

There was controversy in the second half when Glens striker Darren Murray was sent off.

He was given a second yellow card as he was being substituted - under the new rule of failing to leave the pitch at the nearest point.

Glens boss Mick McDermott was furious after the match - and was backed by his opposite number Paddy McLaughlin.

🎥 How bizarre. @Glentoran @Darrenmurray9 sent off v @cliftonvillefc at Oval. Ref Steven Gregg with 2nd yellow to striker as he was being substituted - for not leaving pitch at nearest point. DM ran to changing rooms, not towards fans of his old club...Glens boss Mick McDermott: pic.twitter.com/R60diKn9A1

🎥 Victory for @cliftonvillefc at Oval. Reds boss @paddymac1979 says it was well deserved v 10-man @Glentoran but agrees with Glens that sending off of @Darrenmurray9 because of where he left pitch when substituted was “a wee bit ridiculous: a law they need to look at...” pic.twitter.com/0iISi9ElOL

Also on Friday night, Derry City lost 1-0 away to Dundalk - in a blow to their European hopes as they slip to fourth in the League of Ireland.