Giants prepare for Challenge Cup showdown away to Cardiff 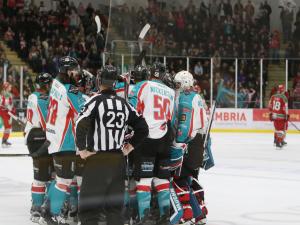 It's a big night for the Belfast Giants, who have an away clash in the first leg of their Challenge Cup semi-final.

They take on the Elite League's leaders Cardiff Devils.

Only one point separates the two sides in the standings, with the Belfast side having won their past four fixtures.

At the weekend, they won their double header away to Sheffield.

Their opponents meanwhile are coming off the back of wins against Nottingham Panthers and Fife Flyers.

The last time tonight's sides met, the Giants won 3-2 in overtime to grab an away victory.

Faceoff this evening is at 7:30pm.