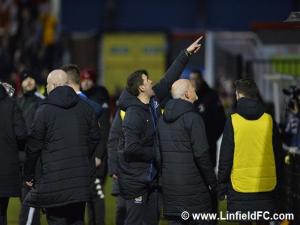 Crusaders and Linfield are waiting to find out what action if any local football chiefs will take after incidents during their match on Saturday.

The Blues won 2-1 at Seaview to move within four points of the Crues at the top of the Danske Bank Premiership.

A fracas involving both teams in the second half resulted in Linfield manager David Healy and skipper Jamie Mulgrew being sent off.

It started after Healy stepped onto the pitch when he thought the ball had gone out of play.

He then accused a Crusaders fan of spitting at him during the melee.

Scorer of the winning goal, Andy Waterworth, says it was a vital victory.

The teams are in action again tomorrow night with a full programme of league fixtures.

Crusaders are away to Ards and goalscorer on Saturday Jordan Owens says with 15 matches remaining there's all to play for.

Elsewhere on Saturday, Colin Nixon got his first win as Ards manager, a 4-2 victory against Ballymena in Bangor.

Jamie McGonigle hit both Coleraine goals in their 2-0 home win over Carrick Rangers.

Dungannon battled back from 2-0 down to draw 2-2 with Glentoran at the Oval.

The league's top scorer, Swifts striker Andrew Mitchell, scored twice to bring his total for the season to 18.

On Friday night, Ballinamallard beat visiting Portadown 1-0 and the game between Glenavon and Cliftonville ended 2-2.