Bradley could be set for Coleraine return against Cliftonville 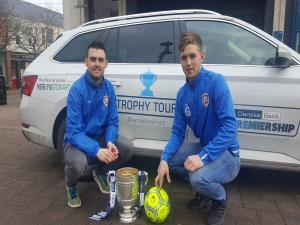 Eoin Bradley could be set for a shock return to the Coleraine line-up in Saturday's Premiership match at Cliftonville.

The striker says he has recovered after suffering a punctured lung and broken ribs last month and is ready to play again.

The third-placed Reds are four points ahead of the Bannsiders and manager Gerard Lyttle says tomorrow could be a key day in the race for Europe.

The other big match in Belfast sees Glentoran hosting Linfield.

The Glens have two narrow defeats and a draw against the Blues this season.

But manager Gary Haveron says they'll have to do better as they battle for a place in the Europa League play-offs.


After champagne success last weekend, it's back to bread and butter this Saturday for League Cup winners Ballymena United.

Cup final goalscorer Conor McCloskey says the players didn't overdo their celebrations this week ahead of a tough test against the Fermanagh men.


Ballymena have received a boost ahead of the game with captain Jim Ervin signing a one-year contract extension. 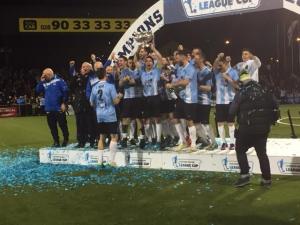 Meanwhile, Glenavon have moved to strengthen their squad by signing midfielder Chris Turner.

The 30-year-old Ballymoney man had been with Scottish side Cowdenbeath last season.

A Northern Ireland under-21 international, his previous clubs include Derby County, Dundalk and Shamrock Rovers.

The Lurgan Blues are away to League Cup beaten finalists Carrick Rangers on Saturday.

There's a late kick-off of 5.30pm at Shamrock Park with the rest of the matches starting at 3pm.