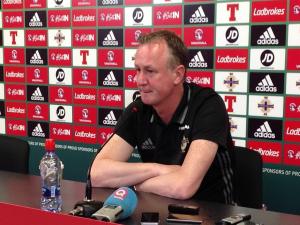 Northern Ireland boss Michael O'Neill has turned down the opportunity to take over at Scotland.

The 48 year-old had been the Scottish FA's preferred candidate to replace Gordon Strachen in the role.

Today he thanked the associations for their professionalism in handling the situation.

O'Neill said " I do not feel that this is the right opportunity for me at this moment in my career."

He led Northern Ireland to a highly successful campaign at Euro2016, where the team reached the last 16.

They also reached the World Cup play-offs in 2017.

Michael O'Neill has been offered an extended contract by the Irish Football Association which could keep him in post until 2024.