Better Off Without You (Pi) 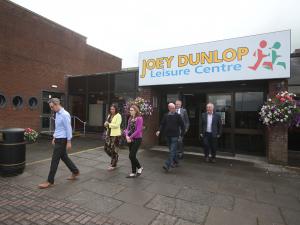 Voters in north Antrim have been turning out to sign a petition of recall to decide if DUP MP Ian Paisley should be unseated.

The petition follows a vote in the Commons last month to suspend the MP for 30 days after it emerged he failed to declare two family holidays paid for by the Sri Lankan government.

A by-election will be triggered if 10% of constituents sign the petition - which equates to around seven and a half thousand eligible voters.

It's widely believed the threshhold for a by election will be met. 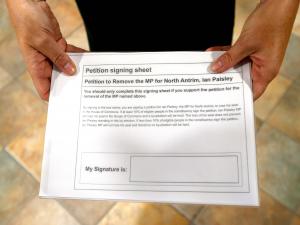 (The petition paper voters are being invited to sign)

The electoral office in Northern Ireland has been accused of limiting the number of venues where voters can sign the petition.

Legislation allows for up to 10 centres to be set up in the constituency where a historic recall petition – which could oust the suspended Democratic Unionist party MP from his seat and force a by election - can be signed over a six-week period.

However, the electoral office has decided to set up only three in North Antrim.

The recall petition is the first of its kind and comes after the sitting MP was suspended last week.

The parliamentary standards committee found him guilty of “serious misconduct” for failing to declare £50,000 of family holidays paid for by the Sri Lankan government in 2013.

He then breached the rules on paid advocacy by writing to David Cameron in 2014 to lobby against a UN resolution on human rights abuses in Sri Lanka.

The petition will run from 8 August to 19 September and will be available for signing on weekdays from 9am to 5pm in centres in Ballymoney (Joey Dunlop Centre), Ballymena  (Seven Towers Leisure Centre) and Ballycastle (Sheskburn Recreation Centre).