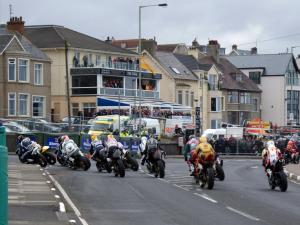 Mervyn Whyte MBE has agreed to remain at the helm of the International North West 200.

There had been speculation after this year’s races that Whyte might step down after 17 years in charge of Northern Ireland’s leading road race.

However, the 67 year old will continue as Event Director as planning begins on a succession strategy for the future management of the event after his retirement.

"In the months following this year’s NW200 I have given a lot of thought to whether the time was right to call it a day.” Whyte explaine

“Anyone who has an insight into the world of international road racing will appreciate how demanding the all year round demands of organising an event such as the NW200 has become.

"I had been considering the option of retiring, but after talking things through with my wife Hazel, the rest of my family and my NW200 colleagues it became clear how big a task the handover to my successor was going to be.

"I simply could not have considered walking away at such a critical time without the necessary steps having been taken to ensure the future success of this magnificent event.”