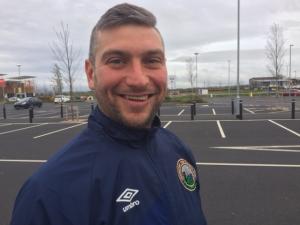 Linfield could go top of the Danske Bank Premiership tonight with a win at Warrenpoint.

But they'll have to get the better of a proud former player to do it:

Ex-Blues striker Matthew Tipton took over from Barry Gray as the Point manager last year, leading them to the Championship title and promotion in his first season.

Goalkeeper Alan Blayney is one of the other Windsor Park old boys at Milltown and Tipton's hoping they'll inspire a shock home win against David Healy's men:

Linfield are the hot favourites, but manager Healy says he expects a tough test...

Kick-off time is 7.45pm and the Blues need to win by two goals to overtake Coleraine on goal difference.

It could be a short stay at the summit though as Oran Kearney's team are in action tomorrow, against Glentoran at the Oval.

The Bannsiders are going for an eighth win in a row - but the east Belfast outfit have also been looking good this season and go into the game on the back of a 3-1 win away to Ballymena.

Congratulations to Ben Wilson who has become the youngest player to score a senior goal for the Bannsiders at the age of 15... #COTB pic.twitter.com/bpF8Gnhpyb

The Reds had a 6-0 win against Knockbreda in the County Antrim Shield mid-week, but manager Barry Gray wants a big improvement in their disappointing league form.

Glenavon hope to follow up their victory over Cliftonville with another home win, against Ards.

However, seven-goal striker Andrew Mitchell points out the north Down team are stubborn opponents - as they proved at Seaview last Saturday...

In the other game this weekend, Ballymena make the journey to Ballinamallard.

Kick-off for the five Saturday fixtures is 3pm.