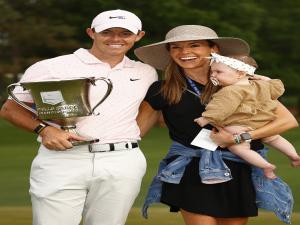 The happy McIlroy family with the Wells Fargo trophy.

Rory McIlroy claimed his first win since 2019 with a one-shot victory at the Wells Fargo Championship last night.

The Holywood man survived a scare at the final hole, where his tee shot narrowly avoided a stream to the left of the fairway.

However, he hit a sensational recovery shot and went on to complete a closing 68 for a 10-under-par total.

🎥 Quail Hollow success for @McIlroyRory - there was late drama but our Holywood hero wins the Wells Fargo Championship in North Carolina with shots like this. “That is a golf shot!” pic.twitter.com/BA4dNpwL3V

Rory pocketed more than £1m in prize money and dedicated the victory to his family:

🎥 It's Mother's Day in America and after his big win at the Wells Fargo Championship an emotional Rory McIlroy is thinking about mum back home in Northern Ireland:@McIlroyRory @WellsFargoGolf @PGATOUR

News and sport on air from 7am pic.twitter.com/TZVgggRd58

The win is McIlroy's third at Quail Hollow and sees him return to the top 10 of the world rankings two weeks before the year's second major at another of the 32-year-old's happy hunting grounds.

The US PGA Championship is being staged at Kiawah Island for the first time since McIlroy romped to an eight-shot win there in 2012.

It was quite a weekend as well for Antrim's hurlers: