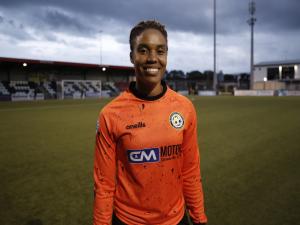 Goalkeeper Nicole McClure has played for her club Sion Swifts, 24 hours after starting for Jamaica in their final Women's World Cup game against Australia.

Nicole travelled straight back from the finals in France and helped Sion beat Crusaders Strikers 4-0 at Seaview on Wednesday night.

The 'Reggae Girlz' number one is the first Danske Bank Women's Premiership player to feature at a World Cup - and she's taken it all in her stride...

🎥 @Nickle165 played for @SionSwiftsLFC in Belfast last night - less than 24 hours after competing for @jff_football @FIFAWWC. Kept a clean sheet too. Then told us all about her adventure with the #ReggaeGirlz in France - she had a ball... #NIFL #DanskeWomensPrem 1/2 pic.twitter.com/4vFFwWGRzs

🎥 US-born, @jff_football #ReggaeGirlz @FIFAWWC star @Nickle165 has been around the world - a few times. But the jet-setting keeper is now right at home in Strabane, loving life @SionSwiftsLFC, rain, hail or shine! More on air & https://t.co/boX2EdCtC7 #NIFL #DanskeWomensPrem 2/2 pic.twitter.com/C88inWrVLu

Lauren Brennan netted twice for Sion while Catherine Hyndman and Zoe McGlynn were also on target as they warmed up for next Friday's League Cup final against Glentoran, also at Seaview.

The Strabane team remain third in the league, just two points behind Glentoran and Linfield.

The Glens moved top on goal difference with a 7-0 victory over Derry City at Ulidia Playing Fields.

There were six different scorers - Rachel Rogan, Kerry Beattie, Nadene Caldwell, Demi Vance and Shannon Grattan were all on target, while Joely Andrews netted a double.

Niamh Connolly’s effort was the difference at the break before Leontia McVarnock doubled the advantage, while Callaghan’s double ensured the Reds stay in fourth.

VIDEO | All the latest highlights from last night's @DanskeBank_UK Women's Premiership as @GlentoranWomen moved to the top of the league as there were also wins for @SionSwiftsLFC and @CVilleLadiesFC. #DanskeWomensPremhttps://t.co/28yRRM78BZ

Seven-up @GlentoranWomen go top of the table @SionSwiftsLFC & their Jamaican World Cup star in hot pursuit@CVilleLadiesFC also to the four!

Reports and reaction on air am.