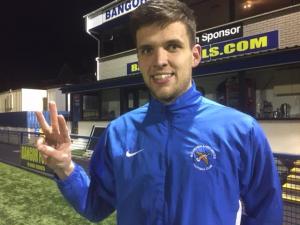 Cliftonville are up to second in the Danske Bank Premiership after a 1-0 victory last night away to Coleraine.

Stephen Garrett scored the only goal in the first half.

And Adam Lecky claimed a hat-trick in 14 minutes for Ballinamallard as they drew 3-all with Ards in Bangor.

Coach John Bailie was in charge of Ards as manager Niall Currie watched from the sidelines ahead of his proposed move to Portadown.

One of the North Down team's goalscorers, defender Emmet Friars, says he'll be missed.

There are three more matches in the Premiership this afternoon -

The Ports are away to Ballymena; leaders Crusaders host Glentoran and third-placed Linfield entertain Carrick.