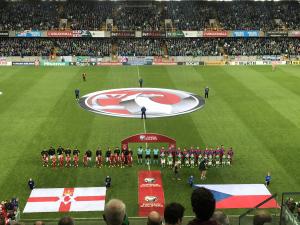 The result means Northern Ireland are assured of finishing second in Group C and took all but banked a playoff spot in the process.

Eight of the nine runners-up in World Cup Qualification head to the playoffs.

It was also a fifth consecutive competitive win for Michael O'Neill's men, a feat never before accomplished by the province.

NI captain Stephen Davis reflects on tonight's 2-0 win over the Czech Rep and looks ahead to the Germany game in October #gawa pic.twitter.com/nFPV7ks6e7

The Czech Republic enjoyed plenty of possession and looked impressive on the ball, however they struggled to create any clear-cut chances, with Keeper Michael McGovern rarely tested.

Northern Ireland showed plenty of attacking impetus early on, and on 28 minutes they struck first.

Jonny Evans, who was subject of transfer interest from Manchester City, Arsenal and Leicester, was the one who grabbed the opener.

After a 2-0 win over Czech Rep, NI keeper Michael McGovern reflects on yet another clean sheet, and facing Germany again. #Gawa #NIRCZE pic.twitter.com/W0vQOhImmZ

The West Brom centre-back, who was played onside by Gebre-Selassie, to bank his second international goal.

The Czechs again held the ball well, but again McGovern was rarely challenged.

With four minutes left in the half, Chris Brunt made it 2-0 with a delicious free kick, which curled round the wall and found the bottom corner.

With Northern Ireland only needing a point to secure second spot, the job was all but done by half-time.

Couldn't have put it better myself. 2-0. Ready for Russia? These guys are #gawa #DareToDream pic.twitter.com/mAVdNorQci

The Czechs had plenty of the ball in the second half, but could find no way through the stingy Northern Ireland defence.

That defence has only conceded twice in the current qualifying campaign, both of those goals coming against world champions Germany.

Northern Ireland welcome the Germans to Windsor Park in their next game, with the world champions just needing defeat to avoid defeat to clinch top spot in the group.

A final game away to Norway then awaits before Northern Ireland will hope to looking ahead to a two-legged playoff in November.

For now though the mood in Belfast is a buoyant one.  Michael O'Neill's men may not be on the plane to Russia just yet, but they at least have directions to the airport.