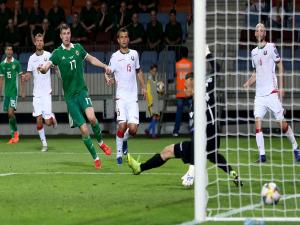 A late night in Borisov looked like ending in frustration for Michael O'Neill's men as they toiled in hot and humid conditions, but with four minutes left McNair found the breakthrough.

The Middlesbrough midfielder took the ball from Jordan Jones on the left, skipped over the challenge of Sergei Kisylak, and struck a low shot under the diving Aleksandr Gutor.

The goal sparked wild celebrations from the Northern Ireland players who have repeated the mantra of targeting 12 points from their opening four fixtures and can now celebrate achieving it.

With half the group games gone, they have given themselves every chance of qualifying for a second consecutive European finals.

The victory piles the pressure on the Netherlands, who may have two games in hand but will head to Germany in September nine points behind Northern Ireland, who are sitting pretty at the top of the group.

It was another game where Northern Ireland had to dig deep before finding a late winner - just as they did in the reverse fixture in March, and in Saturday's 2-1 win over Estonia.

That match was turned by substitutes Conor Washington, Josh Magennis and Jones, who were all brought into the starting line up three days later.

Washington, in the shop window after being released by Sheffield United, threatened at the start of both halves.

In the fourth minute, he drove to the edge of the area before dragging a shot narrowly wide of the goal.

And at the start of the second half, his driven effort brought a first save of the night out of the Belarus goalkeeper.

Steady as she goes - and you know we don’t score in the 1st half away from home! All to play for after interval. There for the taking. #GAWA @OfficialIrishFA pic.twitter.com/lu5c6COtEO

In between, Northern Ireland had struggled to threaten Gutor's goal, but the game would open up considerably in the second half as both sides made changes.

Belarus introduced Denis Laptev, who has six goals in 10 for Dinamo Brest, and Northern Ireland's defenders quickly converged on the 6ft 4in man to block a shot from the penalty spot.

Peacock-Farrell did well to turn away a low shot from Igor Stasevich after Kisylak rolled a free kick into his path on the edge of the area, forcing the Leeds goalkeeper low down to his left.

Northern Ireland responded at the other end where a stinging effort from substitute George Saville led to something of a scramble.

Jones' cross rolled across the face of goal and the ball would not sit for Northern Ireland before Belarus got it behind for a corner.

Michael Smith was next to try but his left footed effort curled just wide.

Belarus hit back with a Yuri Kovalev driving towards the area before laying it off to Pavel Nekhaychik, whose shot went into the side-netting.

But with time ticking down, McNair made the decisive strike to leave the 660 travelling fans in raptures.

Michael O'Neill admitted he feared Northern Ireland's chance had gone before Paddy McNair stepped up with an 85th-minute winner in Belarus.

"You have to have believe in your team," said O'Neill, whose side grew in stature in the second half and deserved the later winner. "I felt at times possibly the game was going to finish 0-0."

Former NI skipper Aaron Hughes announced his retirement after the victory. The 39-year-old told teammates of his decision to end a career in which he won 112 caps, 48 of them as captain.