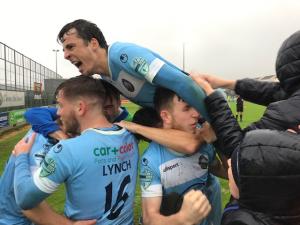 Warrenpoint Town have ended their eight-match losing streak with a dramatic 4-3 comeback victory against Dungannon Swifts.

They scored all four goals in the second half at Milltown, including a 93rd-minute winner from sub. Lorcan Forde who's on loan from Linfield.

After earlier rumours he was about to be sacked, a delighted 'Point manager Stephen McDonnell joined in celebrations with players and fans at the final whistle.

🎥Dramatic stoppage time @LorcanForde1 winner for @thepointfc v @DgnSwifts - 1st win, 1st points of season & did boss @StephenMcD8 enjoy that?! Rumour had it he was on his last legs after 8 defeats on the bounce - today he walks away with 3 precious points. His thoughts next. pic.twitter.com/97NzGVpoYa

🎥 Manager @StephenMcD8 after 1st win of season for @thepointfc - battling 4-3 victory v @DgnSwifts at Milltown. “Delighted for the players...now let’s kick on and get more Ws on the board!” pic.twitter.com/HSqNFx4Ux1

Also in the Premiership on Saturday, Coleraine regained second spot with a 4-1 victory at Carrick.

And Institute drew 1-1 with Ballymena in the only other fixture.

Here’s a chance to reflect on busy weekend in #DanskeBankPrem

The Northern Ireland under-19 women's team had another impressive victory

on Saturday night beating Moldova 6-0 at the Ballymena Showgrounds.

Finally, Linfield complete a player of the month double...

Northern Ireland international Kirsty McGuinness is the NIFWA Women's Player of the Month for September.

Linfield defender Mark Stafford has been named NIFWA Player of the Month for September.

The powerful centre-back helped the Blues to 6 wins in the month, keeping 4 clean sheets in the league and weighing in with a goal against Carrick.

It is his first time winning the award. pic.twitter.com/gTBJskX6j0