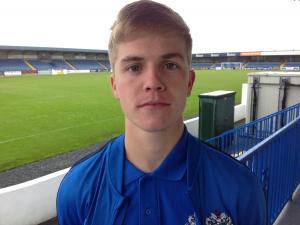 For some it was a surprise summer switch, but after a month at Mourneview the talented winger believes he's made the right choice.

The 21-year-old proved an instant hit with a goal on his debut against Glentoran and he's also impressed in subsequent matches in the Danske Bank Premiership.

On Saturday, he helped the Lurgan Blues to a convincing victory against Cliftonville which moved them level on points with third-placed Crusaders.

So a flying start in County Armagh, confounding any critics of his move from Derry...

Josh had courageously returned to football after last year's Buncrana Pier tragedy in which he lost his mother, sister, brother-in-law and two nephews.

And after being named on the Republic's under-21 squad he had hoped to play a bigger part for the Candystripes this season.

When he decided to move on, Josh wasn't short of options and had a chance to join the current Premiership leaders.

But he chose Glenavon, is pleased with the progress so far and promises fans there's more to come...

So he feels right at home at Mourneview Park and why wouldn't he?

Family members are never far away, making the trip from the North West to support him at Glenavon games.

Next up is this Saturday when Josh and co. entertain Ards.