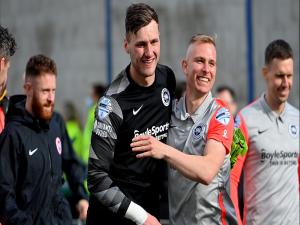 The Irish Cup semi-finals took place on Tuesday at Mourneview Park in Lurgan.

Philip Lowry scored in the 27th minute to give the Crues a 1-0 lead at half-time.

However, Ronan Hale struck just before the hour mark to level it for Larne.

Then, 15 minutes from time Crusaders were reduced to 10 men after a straight red for a reckless tackle from Adam Lecky on Fuad Sule.

It went to penalties and ended in the most controversial and dramatic fashion with Crues keeper Jonny Tuffey booked, then sent off for repeatedly leaving his line in the shoot-out.

Former Linfield player Gary Thompson missed the decisive kick as it went to sudden death - and the east Antrim side won 6-5 on pens.

Tiernan Lynch lifted the Irish Cup twice as Eddie Patterson's assistant manager at Glentoran (2013/15). If he does it in 2021, it would be the first time ever for Larne.

The second semi saw the expected victory for Linfield: