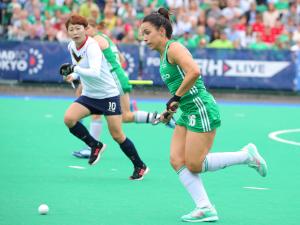 Anna O'Flanagan in action against Korea.

Ireland's women hockey stars have finished runners-up at the FIH tournament in Banbridge.

They were beaten 3-1 by Korea in Sunday's final but still go through to the Olympic qualifiers later this year.

Ireland's Anna O'Flanagan was the week's top scorer with six goals and was also named Best Player at the tournament.

Well, what a week in Banbridge but home side fall at final hurdle