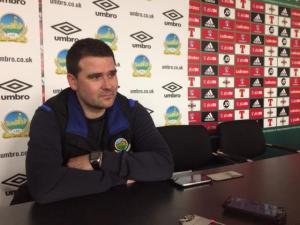 There's a new King David at Windsor Park this festive season - and it looked more like the old Linfield at the weekend.

Former Blues boss David Jeffrey returned to the National Stadium on Saturday as the manager of Ballymena United.

The dramatic ending keeps the Blues in the title race, five points behind Crusaders and one ahead of Cliftonville.

It was a day of mixed emotions for match-winner Stafford.

The big defender was also delighted to hear his old club Ballinamallard had beaten 10-man Glentoran 2-1 at Ferney Park.


However, Stafford then found out he's suspended for the Boxing Day derby against the Glens back at Windsor.

It was a frantic finish on Saturday, with Ballymena left cursing their luck.

They had equalised minutes before Stafford struck - Tony Kane with his 11th successful spot kick of the season.


Jeffrey commented on the extent of the celebrations by the players at his former club.

Elsewhere, the Crues had a 3-1 win against Glenavon at Seaview.

Cliftonville maintained their title push with a 3-0 victory away to Carrick Rangers, despite having striker Daniel Hughes controversially sent off.

Bottom club Portadown had a 2-0 home win against Dungannon Swifts with back-in-the-fold striker Mark McAllister on target against his former club.

Colin Nixon's first game in charge of Ards ended in a one-all draw with Coleraine at Ballycastle Road.

Nixon's old team Glentoran finished with 10 men in Ballinamallard - Stephen Gordon red-carded after clashing with an opponent on the half-time whistle.

The good news for the Glens was that rising star Ethan Warnock made his debut and at 15 is the club's youngest ever outfield player.

The full-back will join Everton next summer.