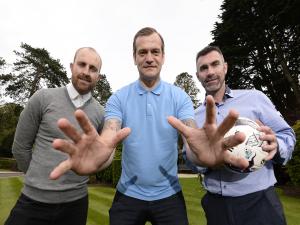 The 41-year-old who recently left Linfield has joined the locally-based OneTwo football agency.

The Fermanagh man will work alongside OneTwo founders Keith Gillespie and Brian Adair representing footballers all over the UK and beyond.

Carroll - who played 45 times for his country and was part of Michael O’Neill’s Euro 2016 squad - is the only footballer to have won league titles in England, Greece and Northern Ireland (with Manchester United, Olympiacos and Linfield respectively).

He is keen to continue his playing career and is delighted to have joined ex-Newcastle and Northern Ireland hero Gillespie and former Irish League player and manager Adair in this new venture.

Carroll says as part of the agency he is determined to help players reach their potential and guide them on and off the pitch.

“I’m very pleased and proud to now be part of the OneTwo football agency. Moving into this area of the game is a big step for me and I wanted to make it with people that I trust. Brian and Keith are in that category,” said Roy.

“It is important to me that a football agency wants to do the best for footballers in every sense and has player welfare at heart. Having spoken at length with Brian and Keith about their business I know that is key in the OneTwo agency.

“I’ve been fortunate to have played at international level for Northern Ireland and been at massive clubs like Manchester United and Rangers. I’ve also played abroad in Denmark and Greece. I know what it is like starting out in the professional arena when you are young and having tough times and successfully coming out the other side and I want to offer my experience, knowledge and guidance to players to help them achieve their potential and make their dreams come true.

“Working with Brian and Keith will give me the opportunity to do that. I’ve known Keith since we became international teammates in 1997 and Brian has been looking after my commercial work with his Experience Epic business for the last two years. We have built a solid foundation with one another and this feels like a natural progression for me."

Carroll’s former Northern Ireland teammate Gillespie said: “It is brilliant for us to have Roy on board. He will be an outstanding addition to OneTwo.

“I’ve known Roy for a long time. Not only has he enjoyed incredible experiences as a player at the highest level for various clubs and his country, but he’s a fantastic person and is just the type of guy who can inspire, guide and assist players in their careers.

“He also has a wealth of contacts across football in Europe and in our conversations is determined to work hard with us to do the best for our players. We are really looking forward to working with Roy.”

Banbridge businessman Adair added: “When Keith and I set up the OneTwo agency we viewed it as an opportunity to represent footballers, be that in Northern Ireland, England, Scotland or elsewhere and try and do our best for them.

“The reason why Keith and I started the agency was because we developed a close friendship and trust and it is the same with Roy who has now joined us.

“We see Roy as the perfect fit for the business. He’s one of the best goalkeepers ever to play for Northern Ireland, he's won major trophies at Manchester United, played for a host of other top clubs in England and has the distinction of playing in Scotland, Denmark, Greece and Northern Ireland where he achieved success.

“Roy is also a special person. He is very honest and really wants to help footballers do the best for themselves which is important to us.

“Between them Keith and Roy have well over 100 caps at international level, won every domestic trophy in English football and have knowledge of the game that few could match. Combined with my experiences in business and football we are focused on driving this venture on.

“It is a big challenge being a football agency. We have been involved in the business for two years and Keith and I have worked hard to establish a good reputation in the industry. With Roy joining us we are now an even stronger team.”