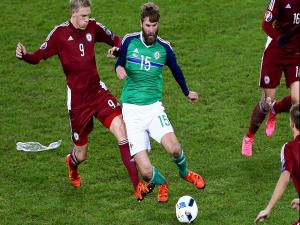 A new coach working with JD Club NI in the North-West is creating quite a stir with young players on the elite development programme.

Just over four years ago former Northern Ireland international Paddy McCourt was in the Celtic squad for a midweek Champions League game against Barcelona at Parkhead.

But these days Paddy can be found putting kids through their paces midweek at The Vale Centre in Greysteel.

The classy winger, who left Glenavon last month, spends a couple of hours every Tuesday night coaching at The Vale and on Thursdays he can be found at St Columb’s College in Derry-Londonderry.

Martin McCann, the regional head coach for JD Club NI, said having someone of Paddy’s calibre working on the programme can only benefit the young participants.

When he moved back to Northern Ireland last summer for family reasons - his wife was seriously ill but is now, thankfully, on the road to recovery - he was invited by the director of the Irish FA’s elite development programme, former international Jim Magilton, to attend some JD Club NI coaching sessions.

Initially, when Paddy was playing part-time football with Glenavon, the Derry Pele, as he is known to many fans, could only commit to coaching one evening per week.

But now that he has severed his ties with the Irish Premiership side he can be found coaching the JD Club NI boys two nights a week alongside fellow coaches Martin McCann, Craig Lynch and coaching assistant Malcolm Ritchie.

“I had no second thoughts when Jim Magilton first approached me about doing some coaching, and I am really enjoying it. It is really helping me to build up my coaching experience,” he said.

Paddy is currently working towards his UEFA A Licence after completing his B licence with the Irish FA a couple of years back when he was moving clubs, between Barnsley and Brighton.

“When you get a bit older you think about the game more. I would have been about 26 or 27 when I first considered taking up coaching and I firmed up my interest when I hit the 30 mark,” he explained.

The winger, who has just turned 33, also admitted he has not closed the door to playing professional football again.

The former Rochdale, Shamrock Rovers, Derry City, Celtic, Barnsley, Brighton, Notts County and Luton star, who won 18 caps for his country, explained his spell at Glenavon did not go as planned and he felt he was hampered by niggling injuries.

He said: “Glenavon simply did not work out, unfortunately. I had a chat with Gary Hamilton (the Lurgan side’s boss) towards the end of the year and we agreed it was probably best for me to move on. It was an amicable split.

“However, I want to continue playing. I have definitely not hung up my boots. I am in good condition physically. I am just taking a bit of time to decide what I want to do next. It has to be the right move.”

Martin McCann revealed when Paddy first appeared at JD Club NI coaching sessions only about 10% of the participants knew who he was.

“I told them to go and watch Paddy’s skills on YouTube, and now everyone knows who he is. His presence has even boosted our attendances,” he quipped.

Martin said the winger’s input into the programme has been “invaluable” to date.

He pointed out: “Having someone of his calibre, who has had the experiences he has had, such as playing in the Champions League and winning titles with Celtic, and who has gained a lot of knowledge, can only benefit the boys.

“He has played under managers like Martin O’Neill and Gordon Strachan and, of course, Michael O’Neill and he is keen to pass his knowledge on.

“And it’s not only the playing side. He wants to help the kids become better human beings. He is helping them with lifestyle choices, such as eating habits, and explaining how it takes hard work and dedication to succeed.”

“Having him here has brought a real feel-good factor to our programme,” he added.