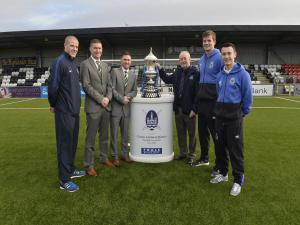 The match will be played at Seaview on Christmas Eve morning

Dundela are preparing to face Linfield Swifts in the Toals Steel and Sons Cup final on Christmas Eve.

Kick-off at Seaview on Saturday morning is 10.45.

The east Belfast side have a player who once made it onto the shortlist for FIFA world goal of the year!

Striker Matty Burrows was nominated for a spectacular backheel volley while playing for Glentoran in 2010.

He has 20 goals already this season.

Here are the Dundela joint managers - David Murphy coming up after Stephen Gourley.

The wee Blues are bidding to lift the trophy for the first time since the 1997/98 season when they beat Dundela 1-0 with a golden goal in extra-time.

The class of 2016 are determined to end the hoodoo and they're also out to impress first team boss, David Healy.

We've been speaking to two of the rising stars.

Cameron Stewart joined the Blues from Crusaders and plays either in defence or attack.

And Johnny Frazer hit a hat-trick as Linfield fought back from 2-0 down to beat Crumlin Star 3-2 in their Toals Steel and Sons semi.

Cameron coming up after Johnny.

Meanwhile, the Children’s Hospice is set to benefit from a new three-year partnership with the County Antrim and District Football Association.

County Antrim FA president Robert Fenton, said: “Our association has always supported charities and causes but not until now has it enjoyed a formal partnership with a charity.

“When we considered a partnership, the board members unanimously proposed Northern Ireland Children’s Hospice. The charity provides professional and heartfelt care to many children and their families in Northern Ireland, and it fills us with a great deal of pride to be associated with it.”

The partnership will be launched with a collection at the Toals Steel and Sons final.