Derry City take on Dundalk in League of Ireland 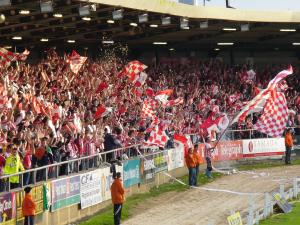 It's fourth versus second in the SSE Airtricity League of Ireland Premier Division as Derry City take on Dundalk at Oriel Park tonight.

The Candystripes head into the game on the back of an impressive 3-1 win over over Shamrock Rovers on Friday.

Aaron McEneff's brace helped the home side to victory at their temporary ground of Maginn Park, Buncrana.

It followed two draws against Limerick and Galway City.

FB: https://t.co/oMG1pMO3pP So proud of our players, staff & manager on tonight's win and of course our loyal supporters who came out in t… pic.twitter.com/2ul82rZdhB

Kenny Shiels' men are two points off Bray, who sit third, and could leapfrog them with a win tonight.

Here's the Candystripes' Boss on how much a good result would mean.