Clubs busy adding to their squads in transfer window 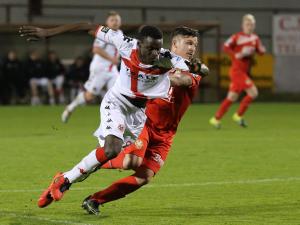 Marcio Soares in action for Crusaders against Portadown. Picture courtesy of David Maginnis

The thirty-three year-old joined the Lurgan Blues in the 2014/15 season.

He scored 40 goals in 91 appearances, and was a member of the victorious Irish Cup winning squad.

The local pair return to the club after a short spell with league champions Crusaders.

Elsewhere, Ballymena have announced defender Kyle McVey has joined Carrick Rangers on loan until the end of the season.