Blues crush Crues, make it 100 goals for the season and race nine points clear at top 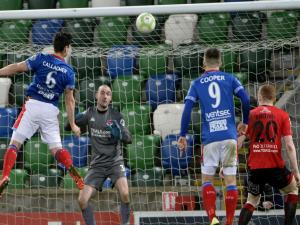 Linfield have raced nine points clear at the top of the Danske Bank Premiership after thrashing Crusaders 4-0 on Friday night.

Defender Jimmy Callacher scored twice at Windsor Park with Andy Waterworth and Stephen Fallon getting the other goals.

Fallon's fourth meant the Blues have now reached the century mark for the season.

The Crues finished with 10 men as centre-back Howard Beverland was sent off near the end for a second booking.

There are five more matches on Saturday afternoon with an early kick-off of 1pm at the Brandywell where Institute face third-placed Coleraine.

At the same venue on Friday night, a 95th-minute goal from Adam Liddle gave Derry City a 1-1 draw with Finn Harps in the League of Ireland.

The Saturday fixtures are: