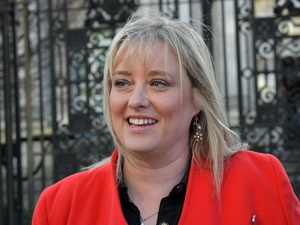 Mairia Cahill outside court in Belfast

Mairia Cahill was granted leave to seek a judicial review of the obligation amid claims it breached human rights and put her personal safety at risk.

But with the publication requirement set to be ended, a judge put the case on hold until imminent new legislation is introduced.

Ms Cahill, who has a restraining order in place against an individual, was forced to withdraw from last year's local elections.

She pulled out of standing to retain her seat on Lisburn and Castlereagh Council over the obligation to reveal her address.

A former Irish Labour Party Senator before joining the SDLP, she feared it would involve too great a risk for her family.

In 2010 she came to public attention by claiming she had been raped as a teenager by a member of the IRA.

Waiving her right to anonymity, she alleged that the paramilitary organisation carried out its own inquiry and forced her to confront the man she accused of attacking her.

Ms Cahill brought judicial review proceedings against the Secretary of State in a case where she was backed by the Northern Ireland Human Rights Commission.

Ms Cahill was speaking outside court in Belfast:

In court today it was confirmed that cross-party support has been secured for new legislation abolishing the requirement for electoral candidates to publish their home addresses.

Paul McLaughlin, representing the Secretary of State, said the law change is expected to be introduced "in the fairly near future".

Seeking an adjournment until April, he argued there was no urgency because the next local government elections are years away.

However, Steven McQuitty, for Ms Cahill, insisted the developments failed to acknowledge the alleged breach to his client's human rights.
"It's not sufficient to deny the applicant her status as a victim," he said.

"Clearly the case is brought in relation to the applicant's individual circumstances, but also on the basis that it could affect others wishing to stand for public office," she said.

"I'm going to grant leave against the Secretary of State."

The judge then confirmed that proceedings are to be stayed due to the anticipated law change.

"They should only be (recommenced) after the legislative process and further discussions between the parties."

Outside court Ms Cahill welcomed the decision and urged the Secretary of State's team to resolve her issues.

"They have to recognise the harm that has been done," she said.

"It wasn't my decision to stand down from a job I was doing well, I had to basically sack myself because their legislation wouldn't allow me to carry out that public service."