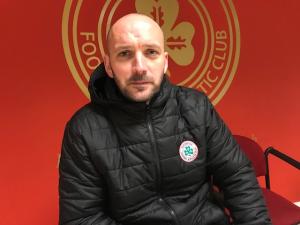 Cliftonville and Glentoran are preparing to battle it out tomorrow in the last match of the Irish League season.

They meet at Solitude in the Europa League play-off final (5.30pm) with the winners securing a £200,000 windfall.

Reds manager Paddy McLaughlin and opposite number Mick McDermott have been on the same coaching course in Belfast this week.

They've got on well, but Paddy jokes he'll be giving his rival boss the silent treatment from today!

Cliftonville have beaten the Glens at Solitude in two of the past three play-offs, including last year.

McLaughlin rejects suggestions his team will start as favourites this time.

He says both clubs are on a high after dramatic semi-final victories on Tuesday night...

Glens Head Coach McDermott - unbeaten after six games in charge - wants more of the same from his players.

He says the success in recent weeks is all about them...

Glentoran have sold out their ticket allocation - home fans can pay at the gate.

Ticket update 🎫 | We have now SOLD OUT our full allocation for Saturday's Playoff final!