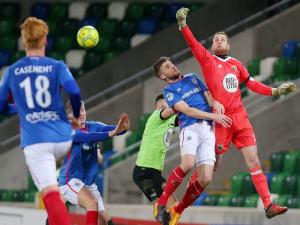 It's a red letter day for Warrenpoint Town on Saturday with league champions Linfield the visitors for the first match at the newly-renamed Q Radio Arena.

The teams recently drew 3-3 at Windsor Park and Point manager Matthew Tipton is confident his players will do the club proud again... 
Blues boss David Healy says it promises to be quite an occasion...

Third plays fifth at Mourneview Park with Glenavon against Cliftonville.

Reds boss Barry Gray says it's the first of two crunch encounters with their rivals for a place in Europe...

The Mallards are bottom, but Glens manager Gary Haveron is wary...

The 25-year-old featured in a friendly for the Central African Republic against Algeria in November.