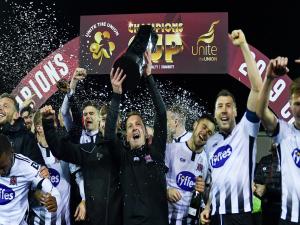 Linfield have crashed to a 6-0 defeat in the second leg of their Unite the Union Champions Cup clash at Dundalk.

It's one of the Blues' heaviest defeats for years and means they lose 7-1 on aggregate.

The club's website called it "a nightmare night from start to finish."

Manager David Healy said he was embarrassed, but added Dundalk were worthy champions.

The Blues were missing star striker Shayne Lavery who's on Northern Ireland duty.

Also last night, Larne had a scoreless draw with Crusaders in the Danske Bank Premiership.

The Crues have failed to win any of their last five league games, but stay in third place.

The Northern Ireland women are in action tonight.

Kenny Shiels's side play Wales at Seaview in a Euro qualifier (7.45pm).

The teams drew 2-2 in Newport two months ago.

Updates on air and online throughout the day pic.twitter.com/SzW9rClcWa