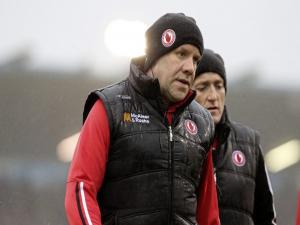 It follows the decision earlier this month that Mickey Harte was no longer continuing in the role, after 18 years and three All-Ireland titles. He's just taken up a new job as Louth manager.

Logan managed Tyrone’s 2015 All-Ireland U21 winning side, when Dooher was a member of his backroom team.

“Both have been appointed and ratified for a 3 year period”#Tyrone #GAA pic.twitter.com/kWb6QmZU3I

Tributes continue locally and across the globe after the death of an icon:

Tributes are pouring in for Diego Maradona, including this poignant message from the Northern Ireland international set-up:
💚 November 25 will forever be a date to remember two icons of the game. 15 years ago we lost George Best and today another genius, Maradona #RIPDiego pic.twitter.com/dPdYuC5WYV

The countdown is on to a crunch match for the Northern Ireland women's team:

🎥 Huge week for the Northern Ireland team with a play-off place for @UEFAWomensEURO up for grabs. Two home wins will do it, starting on Friday night v Belarus. @GlasgowCityFC forward @LaurenW17 is up for the battle:#GAWA @ElecIrelandNI #GameChangersNI pic.twitter.com/C86QHzHJIp

Heartbreaking defeat for Derry, heroic display after preparations were thrown into chaos by Covid - but Candystripes’ season is over#bitored play league champions @ShamrockRovers in semis on Sunday pic.twitter.com/9TH0q7fqXE

And a date's been announced for the second and third tiers of the Irish League to start:

Championship set to kick off in January, #COVID19 restrictions permitting.