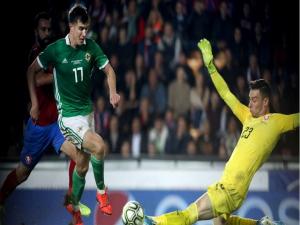 Paddy McNair makes it 3-0 with his second in Prague.

Michael O'Neill's side were good value for their 3-0 half-time lead as McNair's clinical opener (9) was added to by Jonny Evans after Czech Republic failed to clear a set-piece (23).

McNair raced onto Steven Davis' pass to sweep in a third for the visitors (40), but after crumbling against the Netherlands, Northern Ireland were grateful for the final whistle after being pegged back in the second half.

The hosts improved dramatically after the break as quickfire goals from Vladimir Darida (67) and Alex Kral (68) threatened to spoil Northern Ireland's night, but there would be no repeat of Rotterdam.

O'Neill had failed to register a win in any of his previous 12 away friendlies as Northern Ireland boss, but after Ronald Koeman labelled his side's approach as "terrible to watch", this was lucky number 13 and the perfect riposte.

Home side stormed back after break, but NI worthy winners. Entertaining. 1st victory in away friendly since Finland, 2006.#GAWA party in Prague gets underway pic.twitter.com/sqDTcxhGBn

Despite the euphoria of ending England's 43-game unbeaten run in World Cup and Euro qualifiers on Friday, there were plenty of empty seats around the Generali Arena - and this proved a case of after the Lord Mayor's show for the Czechs, who made 10 changes.

The visitors survived an early scare when a poor clearance from Evans allowed Josef Husbauer to cross for Radim Reznik to head towards goal, but Michael McGovern - on his return to the side - kept out his effort from six yards.

But it was O'Neill's men, experimenting with a 3-5-2 formation - who broke the deadlock as McNair struck in the ninth minute, latching on to Liam Boyce's low cross and beating his man to fire under goalkeeper Jiri Pavlenka.

And it was 2-0 in the 23rd minute when a corner caused chaos in the Czech Republic box. Tom Flanagan's effort was blocked but the ball fell for Evans to fire into the roof of the net.

Seconds later, Gavin Whyte was denied from close range and the hosts then wasted their best chance of the first half as Kral beat McLaughlin on the left and pulled the ball back for Michael Krmencik, but he could not find the target.

And things got worse for the Czechs in the 40th minute as Davis slid the ball through from inside his own half and McNair powered towards goal, coolly rounding the 'keeper before slotting home.

HT: Feast your eyes on this

Czechs have been in great form. Wonder if their recent opponents are watching?! https://t.co/CWBrW3WfsJ

Jaroslav Silhavy's side reduced the deficit when Darida's rising shot through a crowded box was too hot for McGovern. And before Northern Ireland could draw breath, Kral strode forward and hit a second into the bottom left corner of the net.

But after dramatically conceding two goals in stoppage time in the Netherlands, Northern Ireland held their nerve in the four added minutes to succeed where England failed on Friday.

Man of the match: Paddy McNair.