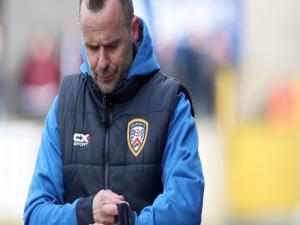 The 44-year-old leaves after one season - and a sixth-place finish in the league.

The Bannsiders say it's by mutual consent and the process of recruiting a new boss will now begin.

The former Dungannon Swifts manager was appointed in September 2018, following the departure of Oran Kearney to St. Mirren.

McAree had led the Swifts to the BetMcLean League Cup just seven months previously and inherited a team that had finished second in the  Premiership and were Irish Cup winners in 2018.

His last match was Tuesday's 5-3 extra-time defeat in the Europa League play-off semi-final at Cliftonville.

The Reds host Glentoran in the final this evening, with a 5.30 kick-off.

Ticket update 🎫 | We have now SOLD OUT our full allocation for Saturday's Playoff final!

Tickets are NOT required for Cliftonville fans tomorrow - so make sure you're there to play your part in delivering another special Solitude atmosphere for Paddy and the boys! pic.twitter.com/JB45tiZKLd

Transfer news and Crusaders have signed Jarlath O'Rourke from Dungannon.

Transfer news. Crusaders have signed another defender from Dungannon Swifts - this time it's @JarlyO_R (2-yr deal) after @C_Hegarty37 moved from Stangmore to Seaview earlier this week. #DanskeBankPrem

In the League of Ireland last night -

Derry City drew 1-1 with St. Pat's at the Brandywell.

Points shared at the Brandywell as both sides maintain their positions in the Premier Division table!