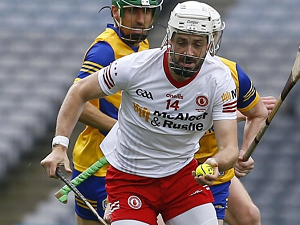 A sports star from Northern Ireland has died suddenly in an accident in Spain.

Tyrone hurler Damian Casey, 29, was attending a friend’s wedding when he died in an incident in a swimming pool.

The Dungannon man played for Eoghan Ruadh GAA club and at inter-county level for the Tyrone senior hurling team.

He is regarded as one of the county’s best hurlers.

“Someone who brought honour, delight and simple, straightforward gladness to our whole county, and far beyond, is gone and it’s so hard to take in.

“There are very difficult days ahead for Sean, Susan, Louise and Catherine, for Damian’s wider family circle and many friends and associates, for his teammates and for the Gaels of Dungannon and Tyrone.

“Our deepest sympathy goes to them, and our focus must now be on providing the support and comfort that will be so badly needed.

“Damian Casey was a special gift to Tyrone and to hurling. We were the richer for his presence and are the poorer for his passing.”

“We are profoundly saddened to learn of the tragic death of Damian, esteemed graduate of UU and Fitzgibbon hurler.

“We extend our deepest sympathy and offer our sincere condolences to the entire family circle at this very sad time.”

The Gaelic Players Association tweeted: “Players across Ireland are devastated for the family and friends of Damian Casey and for all in Dungannon hurling club and Tyrone GAA.

“Damian stood out as a person and leader. On the pitch he was a magician of rare skill. He was one of us. He was among the best of us.”

Sinn Fein Stormont leader Michelle O’Neill tweeted: “The community in Dungannon is heartbroken with news of the tragic death of Damian Casey, a fantastic hurler.

“Thinking of his devastated parents and sisters, his family and friends, his teammates and all those who loved him.”