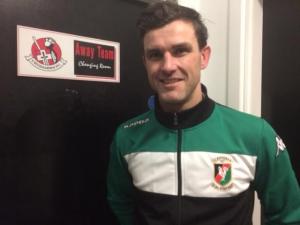 The title race is hotting up in the Danske Bank Premiership ahead of the festive fixtures.

Crusaders saw their lead at the top cut to five points at the weekend.

That's because Linfield beat Carrick Rangers 3-0 - while the Crues were held to a two-all draw by Glentoran.

Glens goalkeeper Elliott Morris was outstanding at Seaview, but says the game ended on a sour note when a Crues' fan spat at him.

The former West Brom player told us it's ironic as his family are all big Crusaders supporters.

The Portadown man is leaving Ards after five years in charge of the North Down club.

Ards defender Emmet Friars says Currie will be missed - but he can understand why he's moving on.