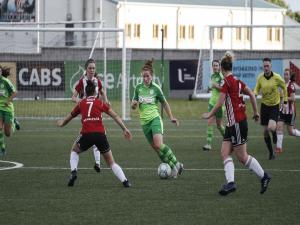 Linfield returned to the top of the Danske Bank Women’s Premiership in dramatic fashion as two late goals saw them snatch victory from the jaws of defeat against Crusaders.

However, substitutes turned the game in Linfield’s favour late on with Casey Howe levelling before Caitlin McGuinness - sister of Kirsty - gave the Blues a late and decisive lead.

Phil Lewis’s side are now back on top of the table as they move three points clear of Glentoran who do not play this week ahead of their League Cup final with Sion Swifts on Friday night.

Cliftonville strengthened their grip on a top four spot as they ran out 2-0 victors at the Ryan McBride Brandywell Stadium against Derry City.

The Candystripes have just one point and one goal from their opening nine league games and were without a raft of first-team players for the visit of the Reds.

Northern Ireland captain Marissa Callaghan was again the star for the North Belfast side, netting goals either side of the break.

VIDEO | All the goals from last night's @DanskeBank_UK Women's Premiership games as @LinfieldLadies returned to the top of the table after a comeback victory over @CruesStrikers, whilst @CVilleLadiesFC win on the road. #DanskeWomensPremhttps://t.co/SeTq5XBnQv

Exactly how it looks after @LinfieldLadies & @CVilleLadiesFC victories. LFC 3 clear.

But, next up League Cup final at Seaview this Friday - @GlentoranWomen v @SionSwiftsLFC