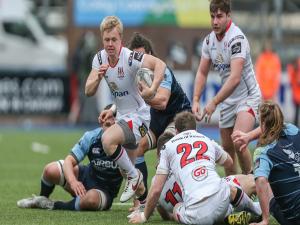 Charles Piutau and Pete Browne are back in the starting XV

Dave Shanahan is to make his first senior start for Ulster as they travel to play Exeter in the European Champions Cup.

The scrum-half has made ten appearances so far, coming on as a replacement.

He'll partner Paddy Jackson in the half-backs combination, while Stuart McCloskey and Luke Marshall are the midfield pairing.

Andrew Trimble will captain the side from the left wing, with Charles Piutau back in the side at 14, and Louis Ludik at fullback.

With Pete Browne alongside Kieran Treadwell in the second row, Iain Henderson will move into the back row together with Chris Henry and Sean Reidy.

Les Kiss' men are sitting in third place in their group- Pool 5- and will need a good result if they're to stand a chance of qualifying for the knockout stages.

It comes after defeats away to Leinster and Scarlets in the Pro12.