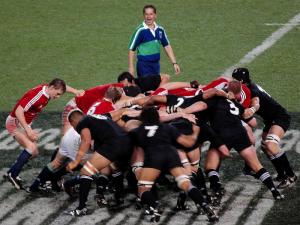 Ireland fly-half Johnny Sexton has been given the all clear after a head injury assessment.

The Leinster number 10 suffered a knock during the Guinness Pro12 semi-final defeat at home to Scarlets.

It was the first home loss for a side in the Pro12 playoffs since a change in the format of the competition.

Sexton has had historic problems with head injuries in his career, notably on international duty during the Six Nations.

British and Irish Lions Head Coach Warren Gatland said the standoff had no symptoms from the injury, no concussion.

Meanwhile, Number 8 Billy Vunipola has been sidelined with a shoulder injury, and has been replaced in the squad by fellow England back-row James Haskell.

"Haskell gives us that flexibility, and he has had experience both touring and playing in New Zealand."https://t.co/D3dpeYEtjR#AllForOne pic.twitter.com/BrFAM3Ohia

The Lions play their first tour match of their summer tour on June 3, against New Zealand Barbarians in Whangarei, with the first test at Eden Park, Auckland on June 24.

It's great to be back in camp together!

The combined home nations XV will play 7 tour matches and 3 tests, before the tour ends on July 8.